The microphone mute proved to be effective. Both President Trump and former Vice President Joe Biden each received two minutes of uninterrupted time to answer moderator Kristen Welker’s questions at last night’s debate. For us voters, it was a breath of fresh air compared to the chaotic first debate.

Before we dive into who "won", we'll take a moment to ask: Want to follow your industry as carefully as we’re following this election? Book a demo to learn more about our social intelligence and analysis offerings.

Within minutes of the debate ending, Google searches for “who won the debate” were at their peak. As we know, determining a winner is subjective.  Audiences and political pundits hear what they want to hear. Some post-debate polling declared Trump the outright winner, others declared Biden. Looking at all U.S. coverage – there are around 300 more mentions that say “Trump won.” 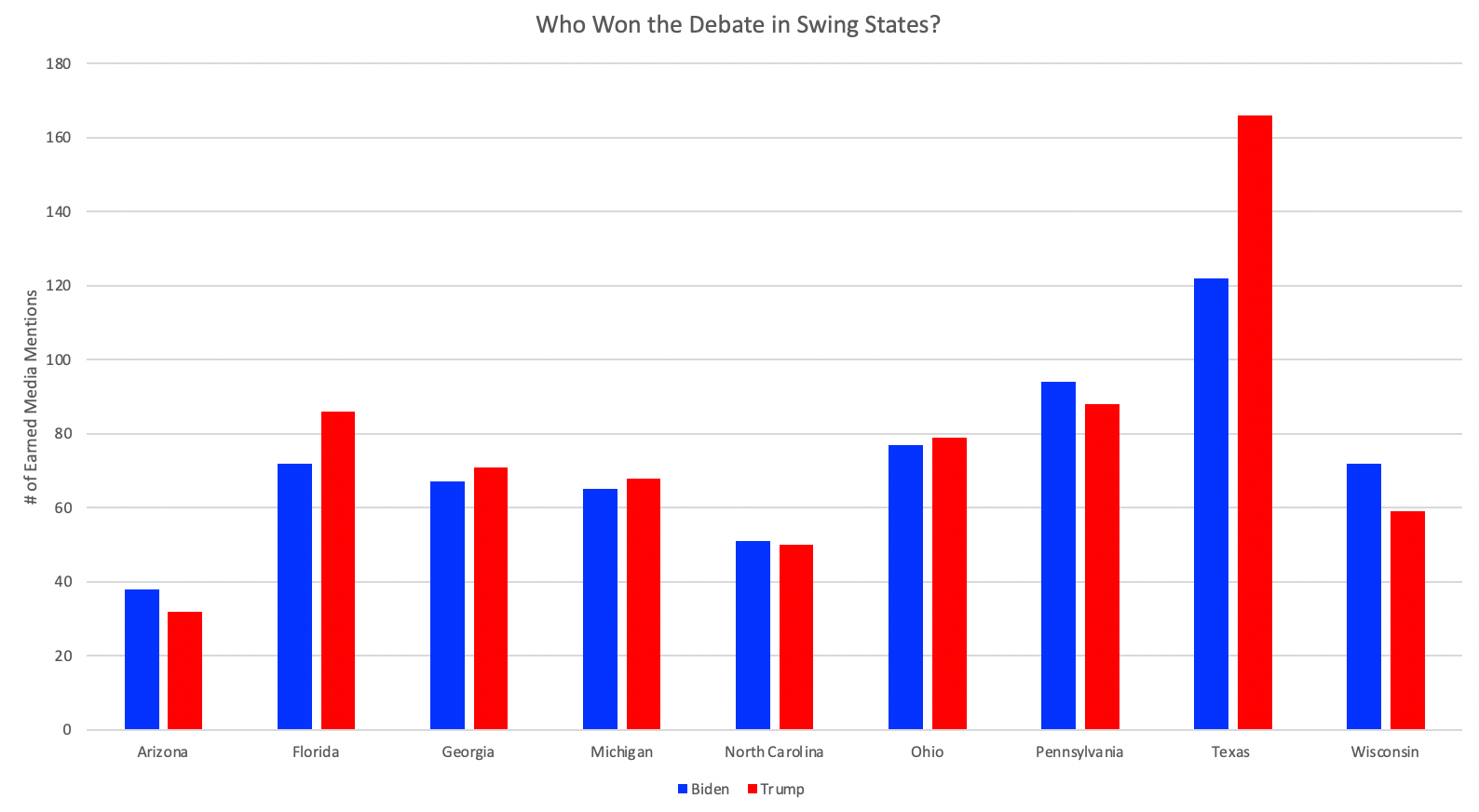 Like the American electorate, publications in swing states were nearly split – 52% to 48% in favor of Trump. There was a 10-point swing from the Vice-Presidential Debate where 62% of swing state publications said Pence was the winner. Trump won big in Texas and Florida. Biden won respectably in Arizona, Pennsylvania, and Wisconsin. If Biden carries those three states on election day, he will likely be the winner.

Throughout our analysis, COVID-19 has proven to be the most visible issue of the 2020 election. Last night was no different. COVID-19 was the first issue discussed, and 23% of the debate coverage talked about the pandemic. The same themes emerged – the current American death count, the pending vaccine, the failure of the Trump administration, China’s to blame, etc. There was debate around re-opening strategies. Biden offer some substance to his plan on what he would do different as President, while Trump continued to defend his administration’s response.

Unlike previous debates, climate change received sizable attention – 12% of the total debate coverage. Biden acknowledged the existential threat that climate change poses and laid out his plan to bring the United States to zero carbon emissions.  He focused on the transition to renewal energy and how his plan will create new jobs and economic growth. Renewable energy received the most climate change related coverage. Trump did not cite his climate plan but did tout his achievement of energy independence. As expected, Trump pressured Biden’s position on fracking and scored a perceived campaign victory with Biden’s quote: “I would transition from the oil industry, yes.”

Another American threat that has received little coverage throughout the campaign is foreign election interference. Before the debate, national security officials provided evidence that Iran and Russia are trying to influence the presidential election. Considering Russia meddled in the 2016 campaign and the multiyear investigations that followed, it’s no surprise that Russia was the most talked about topic of last night’s debate. It’s also no surprise, the controversy surrounding Biden’s son, Hunter and his Ukraine business dealings, was a key topic. The final controversial topic was related to a report about Trump’s business pursuits and bank records in China, and it received about 4x less coverage than Hunter Biden.

What did the world think?

In the past seven days, the debate garnered nearly 100,000 media mentions in the United States. Worldwide, there was an additional 36,000 mentions published in English. 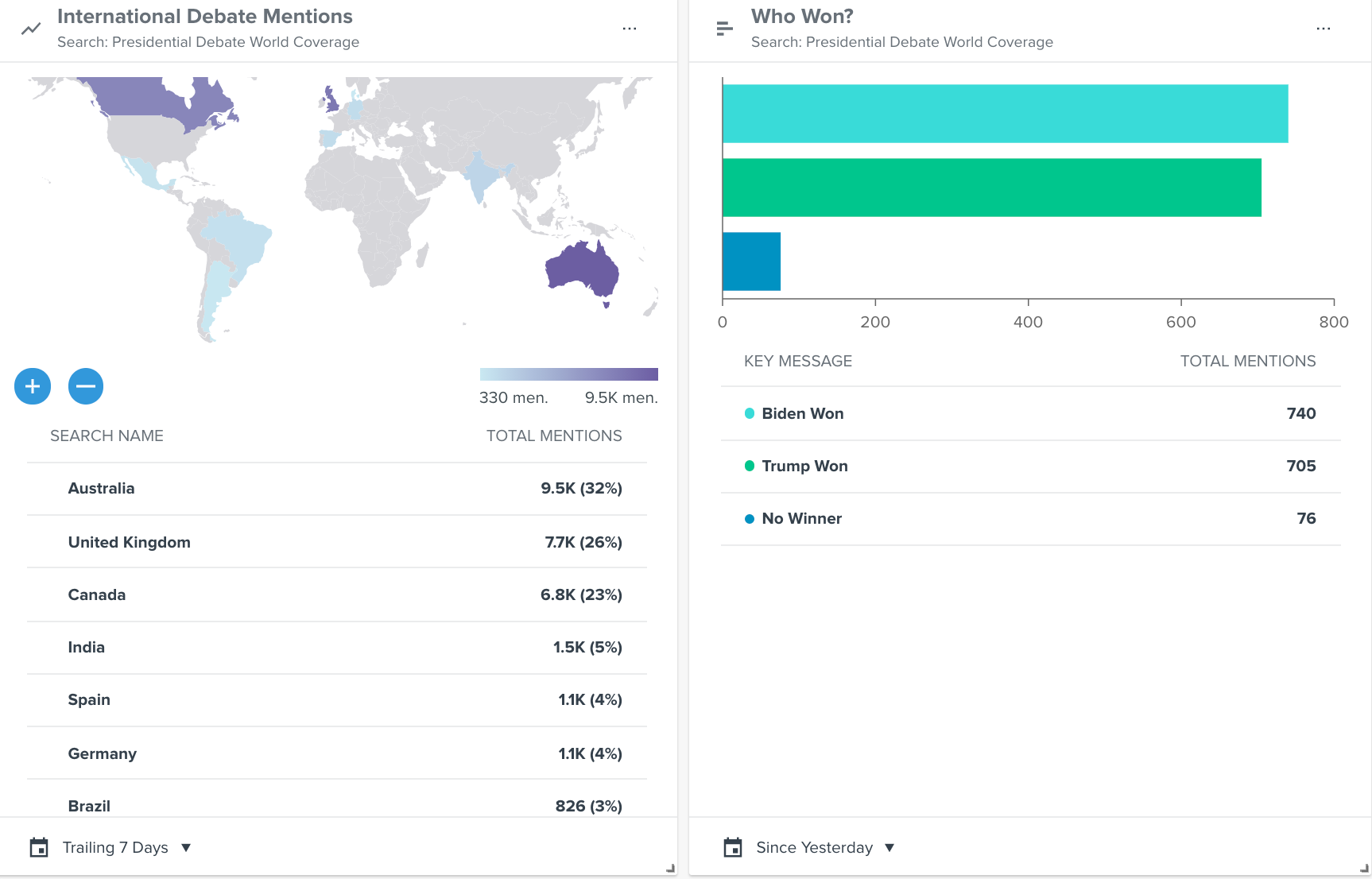 Expectedly, the lion share of the coverage was published in English speaking countries – Australia, United Kingdom, and Canada. And through the eyes of the global media – Biden narrowly won the debate. 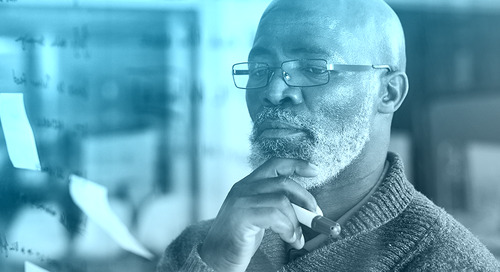 How to Grow Your Agency During Tough Times

3 Ways to Ensure Your Agency’s Profitability Amid Uncertainty